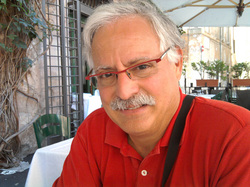 He taught Classics at UCLA from 1976 to 2004. Since then he has been Professor of Art History and Classics at the University of Virginia, where from 2004 to 2009 he also served as Director of the Institute for Advanced Technology in the Humanities. In 2009 he founded the Virtual World Heritage Laboratory with the mission of applying 3D software to research in the humanities. His current research, funded by over $1 million in grants from the NSF and NEH, includes a new 3D digital model of Hadrian's Villa (Tivoli, Italy); and the development of new tools for 3D data capture and digital restoration of sculpture. He is also principal investigator of SAVE, a project sponsored by the National Science Foundation to create a database of 3D digital models of cultural heritage sites, monuments, and landscapes.

Frischer's research career reflects his interest in interdisciplinary approaches, and has included studies in the literature, philosophy, art history and archeology of Greece and Rome. He is the author of several books, including Shifting Paradigms: New Approaches to Horace's Ars Poetica, and The Sculpted Word: Epicureanism and Philosophical Recruitment. Frischer directed the excavations of Horace's Villa, a project sponsored by the American Academy in Rome and the Archeological Superintendency for Lazio of the Italian Ministry of Culture. He is founder and director of the Rome Reborn Project, an international initiative based at the University of Virginia, UCLA, the University of Caen, the University of Bordeaux-3, and the Politecnico di Milano. The goal of the project is to create 3D digital models illustrating the urban development of ancient Rome from the first settlements in the late Bronze Age (ca. 1,000 BCE) to the early Middle Ages (ca. 550 CE).